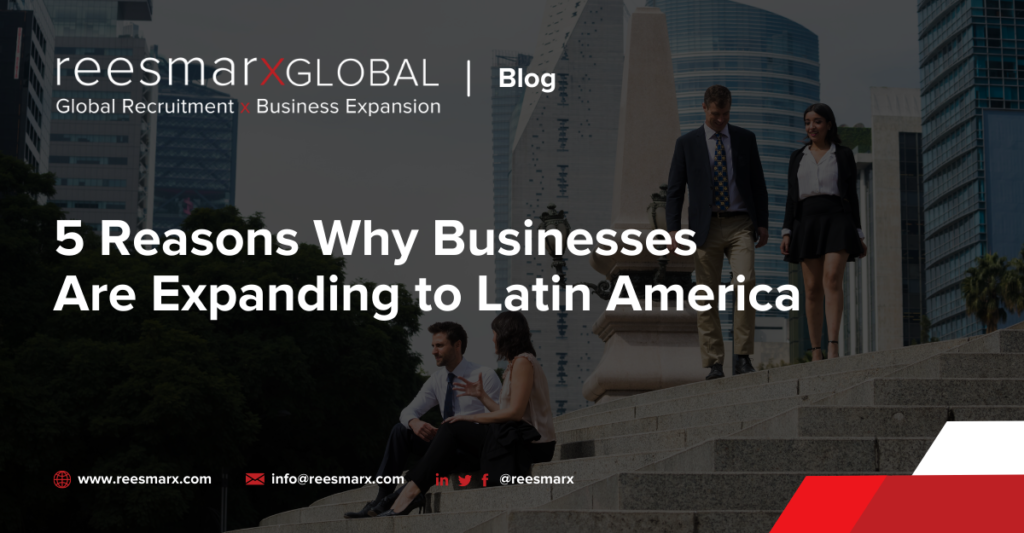 In March 2021, IBM announced the launch of its first IBM Cloud Multizone Region (MZR) in Latin America.The technology leader already has a large presence in Brazil and is doubling down to accelerate the development of cloud infrastructure.The expansion follows development of MZR in Toronto Canada, and Osaka Japan in 2020.

This is just one indicator of the anticipated growth in Latin American countries.The new high-speed low latency network is a nod to the needs of technology, service and manufacturing businesses that are expanding into Latin America.

For the past fifteen (15) years, Latin American economies have posted a faster GDP growth rate than developed regions. But there are five primary reasons why businesses are keenly interested in expanding to Latin American countries. And why the rapid growth of foreign investment in LAT is expected to continue.

The fourth-largest trade bloc in the world is Mercosur. It is made up of Brazil, Argentina, Uruguay, Venezuela, Bolivia and Paraguay.The combined population of the regions is 260+ million residents.The total GDP value of the Mercosur trade bloc is $3 trillion per year.

The two official languages of the region are Spanish and Portuguese.Guarani was also recognized as an official language of the region in 2006.The negotiating power of Mercosur allows for successful international trade relations.The Mercosur countries have signed political and commercial cooperation agreements with a large and diverse number of countries, on each continent.

The European Commission cites the varied advantages of the Mercosur trade agreement.Some of the benefits through the reciprocal agreement between the EU and Mercosur bloc countries include:

·         The right to free movement, residents and employment throughout the bloc.

·         The harmonization of social security systems and labor laws (which makes LAT countries easier to expand to for international businesses).

Because of the numerous advantages to doing business in Latin America, the improvement of infrastructure is a priority.However, many LAT countries have not had the resources before, to make the necessary improvements.

Businesses that are heavily investing in LATAM countries are helping them fast-track the infrastructure improvements needed to grow the national economies. And further improvement to infrastructure only enhances the appeal and attractiveness of investment to other foreign held businesses.

Did you know that almost 80% of Latin America’s GDP growth over the past 15 years has come from a rise in available labor?According to a report by McKinsey & Company, the rate of employment growth is expected to drop less than 1.1% per year by 2030.While other countries experience declining populations and general labor pool, Latin American countries present an attractive resource for business growth. However, output per worker has only rose 0.6 percent per year since 2000.That makes LAT one of the weakest productivity performances in the world.

However, for general and unskilled labor, it is difficult to find better resources than Latin America.The low productivity rate per worker could be substantially improved with training, and advanced production technologies and methods.That is where LAT gains a reciprocal advantage.The injection of not just manufacturing technology, but also advanced skill training imported from foreign business expansion into the region.

Latin American countries have enjoyed high prices for commodities in the past.Exports like coffee, soybeans, iron ore, oil and gas and copper were key economic growth drivers.It helped the countries penetrate the global markets, and lower domestic poverty by raising incomes. But now, more moderate levels of commodity prices have changed that model.

5. Threat of Increased Trade Protectionism in the United States and Other Countries

Latin American economies have outperformed in terms of GDP growth for more than fifteen (15) years.But the impact of increasing trade protectionism may give LATAM nations another powerful boost to global growth.

Serving the North American market with products and goods from the United States, can be difficult.Particularly when tariffs threaten the cost of trade.The ongoing trade war between America and China has caused APAC countries to look for a way around the new trade laws.And with an impressive labor pool and geographic proximity through developed ocean shipping lanes and ports to the United States, Latin America is the next best option. Particularly for manufacturers of consumer or commercial products.

Are you planning a global business expansion into a Latin American country? Our team at reesmarx has been helping businesses set up PEOs and penetrate the rapidly growing LATAM market. We provide expert consulting, recruitment and human resource services. Contact our team today to learn more.